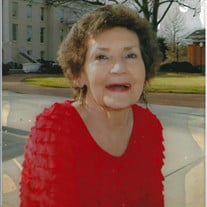 Margaret Annette (Momma Net) Penland, 77, of Statesville, passed away on Friday, February 7, 2020 at her home after a long period of declining health. Born November 23, 1942 in Buncombe County, N.C., she was a daughter of the late Burlen Ballew and Mildred Pansy Williams Ballew. In addition to her parents, she was also preceded in death by brothers: Richard, Mack, Everette and Frank Ballew and sisters: Shirley Scott, Patricia Allison and Ruth Penley. She married Donald McCrackin Penland, (Dad-o) on October 19, 1963 who also preceded her in death. Annette, fondly known as “Momma Net” operated a daycare in her home for 40 years. Momma Net was such a huge part of so many children’s lives and she loved each child as if they were her very own. Momma Net was provided a lifetime of love and joy by the children she served. Everyone who kn3ew Momma Net knew her love of children and the difference she made in their lives. Up to the day she left this earth, she was surrounded by her family and extended families. Her son, Donald, opened a childcare center called “Footsteps” to honor her by following in her footsteps. The Annette B. Penland Award is awarded to the teacher of the year for their dedication and outstanding service in the childcare industry. She is survived by her children: Sonya P. Trivette (Randy) of Statesville and Donald Lee Penland (Jon) of Hickory, her grandchildren: Zachary Trivette (Sarah) of Statesville, Savannah T. Powers (Justin) of Harmony and Donald Leland Burns-Penland of Hickory. Also surviving are her great grandchildren: Jase Everette Powers of Harmony and Chase and Chance Dolan of Statesville along with her brothers, Anthony (Patty) and David Ballew all of Asheville. A celebration of her life will be held at 7:00 P.M. Monday at Oakdale Baptist Church with Pastor Matthew Eades officiating. The family will greet friends following the service in the fellowship hall. Fond memories and expressions of sympathy may be shared at www.nicholsonfunerals.com. Memorials may be given to Hospice & Palliative Care of Iredell County, 2347 Simonton Rd., Statesville, N.C. 28625 or to the Nursery Fund of Oakdale Baptist Church, 858 Mocksville Hwy, Statesville, N.C., 28625. Nicholson Funeral Home is entrusted with the arrangements.

Margaret Annette (Momma Net) Penland, 77, of Statesville, passed away on Friday, February 7, 2020 at her home after a long period of declining health. Born November 23, 1942 in Buncombe County, N.C., she was a daughter of the late Burlen Ballew... View Obituary & Service Information

The family of Mrs. Margaret Annette Ballew Penland created this Life Tributes page to make it easy to share your memories.

Send flowers to the Penland family.