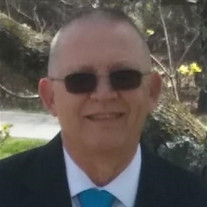 Tony Leon Whitlock, 72, of Statesville, died Sunday, January 19, 2020 at the Gordon Hospice House. He was born in Iredell County on October 4, 1947 to the late Robert “Jack” Whitlock and Edith Bass Whitlock. Tony served his country in the US Army and was retired from Harris Teeter after more than 30 years as a produce manager. He was a member of Bright Light Baptist Church and loved his church family. Tony also enjoyed gardening, going to gun shows reloading ammo. More than anything else, he loved his grandchildren and was the “school bus driver” for them. Those left to cherish his memory are his wife of 35 years, Carolita Warren Whitlock, 3 daughters; Jennifer Pope (Ray), Erin Whitlock and Amber Whitlock, 6 grandchildren; Mattie Pope, Terry Renegar. Brayden Stiltner, Caleb Marlowe, Lacey Wyatt and Kyleigh Young. Funeral Services for Mr. Whitlock will be held Saturday, January 25, 2020 at 11:00 am at Bright Light Baptist Church. Burial will follow in the Church Cemetery with full military rites. The family will visit with family and friends from 10:00 to 11:00 am prior to the service. Pallbearers will be Shane Wiley, Jacob Wiley, Timothy Wiley, Shannan O’Shaughnessy, Barry Waddell and Ray Pope. Honorary Pallbearers will be Barry Mitchell and Roger Mitchell. Memorials may be made to Hospice and Palliative Care of Iredell County, 2347 Simonton Rd., Statesville, NC 28625. Fond memories and condolences may be left at www.nicholsonfunerals.com. Nicholson Funeral Home is serving the Whitlock family.

The family of Tony Leon Whitlock created this Life Tributes page to make it easy to share your memories.

Send flowers to the Whitlock family.