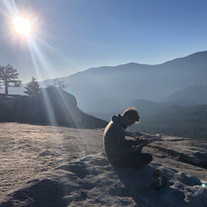 William Benjamin Brown, known to most as “Ben”, the son of Scott and Mary Brown, was born on August 28th, 1996. He grew up in Statesville, North Carolina and graduated from Statesville High School in 2014. Ben spent his childhood riding bikes around the neighborhood, causing trouble with friends, winning wrestling matches, and playing soccer at all hours of the day. He loved spending time visiting family in Georgia, Arkansas, and Maine where he played dominos, watched football, explored hiking trails, and competed in family gaming tournaments. As an adult he moved to Colorado, where he became an avid rock climber, backpacker, and skier. He was excelling in engineering classes at the University of Colorado at Boulder but always made time to call his parents and grandparents, often sending selfies and other pictures of his activities. In between classes and outside adventures, he loved watching sports, laughing at comedies, and trading jokes with friends. His family knew him as a kind, spontaneous, and thoughtful young man who was determined to make a successful life for himself. During his life he gifted his family with numerous precious memories, many of which still inspire laughter even after death. Ben was preceded in death by his maternal grandmother, Marian McKelvy, and his paternal step-grandfather, Lloyd Parks. He is survived by his parents, Scott and Mary Brown, his siblings Rose, Isaac, and Lily, his maternal grandfather Michael McKelvy, and paternal grandparents Jerry Parks, Bill Brown and step-grandmother, Wanda Brown, and numerous aunts, uncles, cousins and close friends from both North Carolina, Georgia, Arkansas, Maine and Colorado. A Celebration of Life Service will be held on Saturday, January 29, 2022 at 11:00 am at St. Philip the Apostle Catholic Church. The family will visit with friends on Friday, January 28, 2022 from 5:00 pm to 7:00 pm at Nicholson Funeral Home. In lieu of flowers, the family requests that donations be made in Ben’s name to Fifth Street Ministries. https://www.fifthstreetministries.com/donations/. Nicholson Funeral Home is honored to serve the Brown family. You make watch the service live here: https://view.oneroomstreaming.com/authorise.php?k=1643419778163120

William Benjamin Brown, known to most as &#8220;Ben&#8221;, the son of Scott and Mary Brown, was born on August 28th, 1996. He grew up in Statesville, North Carolina and graduated from Statesville High School in 2014. Ben spent his childhood... View Obituary & Service Information

The family of William "Ben" Benjamin Brown created this Life Tributes page to make it easy to share your memories.

William Benjamin Brown, known to most as “Ben”, the son of Scott...

Send flowers to the Brown family.