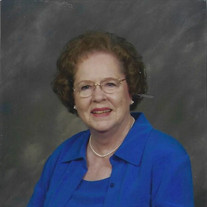 Betty Jo (B.Jo) Henderson Litaker,90, died December 11, 2020 at Iredell Memorial Hospital. She was born February 6, 1929 in Canton, N.C. to Clifton Lafayette Henderson and Clora Reno Henderson. She was the youngest of six children and was preceded in death by her parents and all of her siblings. On December 16, 1956, Betty Jo married Carl Adams Litaker. When they met, Carl gave her the nickname, “B.Jo” and most people called her that. They enjoyed almost fifty years of marriage and were blessed with a beautiful daughter, Carla Kay who was married to Leo V. Hearst, III. Both Carl and Carla preceded B.Jo in death. Survivors include a son-in-law, Leo V. Hearst, III (Dianne); nieces: Peggy Henderson Jenkins, Karen Jenkins Robinson, Martha Moore Moss (James), Beth Henderson Hardin, Blake Henderson Smith (Chris) and nephews: Cliff Henderson (Beth), Matthew Robinson and David Moss. Also surviving are nieces Mary Ann Brown (Ken), Carolyn DeBruhl (James), Brenda Estes, Melissa Allen (Keith), Lauren Stroud, Angela Estes Moore and a nephew, Christopher Stroud. An additional survivor is a special family friend, Larry E. Nichols. B.Jo graduated from Canton, N.C. schools and received her B.S. and M.A. degrees in library science from what was then Appalachian State Teachers College. Following graduation, she became the second librarian at Myers Park High School in Charlotte. Returning to her beloved Boone, she was librarian at Appalachian High School and a supervising teacher for the college. She met Carl at a faculty meeting. Three and a half years later they were married . Following their marriage, the couple was employed by the Greensboro City School System. B.Jo was librarian at Gillespie Park School when it became the first integrated school in N.C. They then returned to Carl’s hometown of Statesville, where Carl became Dean of Mitchell and B.Jo was librarian. In 1962, Carla was born and during her early years B.Jo was librarian at D. Matt Thompson, Jr. High School. At this point B.Jo was privileged to work for ten years with Davis Hospital School of Nursing. She organized and maintained a nursing/medical library for use by the student nurses. In 1963 Carl left the field of education and became an agent with Jefferson Standard Life Ins. Co., forming his own corporation known as the Litaker Agency Ltd. B.Jo retired from education also and joined the family business as office manager and agent. They worked together until retirement then kept an office in their home until Carl’s death in 2001. B.Jo was a devoted member of St. John’s Evangelical Lutheran Church; singing in the choir, serving on the Church Council, and especially active in the women’s organizations. In 1966 she organized a church library and was librarian until she died. She was active in the statewide Lutheran Woman’s organization as an officer and director of leadership training groups for this district. In addition in the early 70’s, B.Jo became the first woman elected to the Executive Board of the N.C. Synod, Lutheran Church in America. A celebration of life service for Mrs. Betty Jo Litaker will be held on Sunday, January 3, 2021 at St. John’s Evangelical Lutheran Church with Pastor Ernie Sheldon officiating. Burial will follow in Oakwood Cemetery. Condolences may be sent online to the family to www.nicholsonfunerals.com. If you wish to honor the life of B.Jo, please send a gift to St. John’s Evangelical Lutheran Church, 740 N. Center St. Statesville, N.C. 28677, The Gordon Hospice House, C/O Hospice & Palliative Care of Iredell County, 2347 Simonton Rd., Statesville, N.C. 28625 or to the Lake Norman Humane Society, P.O. Box 3937, Mooresville, N.C. 28117. Nicholson Funeral Home is entrusted with the arrangements.

Betty Jo (B.Jo) Henderson Litaker,90, died December 11, 2020 at Iredell Memorial Hospital. She was born February 6, 1929 in Canton, N.C. to Clifton Lafayette Henderson and Clora Reno Henderson. She was the youngest of six children and was preceded... View Obituary & Service Information

The family of Mrs. Betty Jo Litaker created this Life Tributes page to make it easy to share your memories.

Send flowers to the Litaker family.