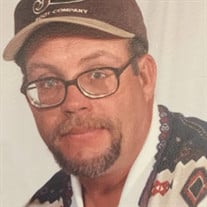 Grover Glenn “Goobie” Johnson, Jr, 59, of Statesville, passed away unexpectedly on Friday, August 20, 2021. Goobie was born in Monmouth County, NJ on April 29, 1962 and was the son of the late Grover Johnson, Sr. and Laura Rochester Johnson. He was a graduate of North Iredell High School and on August 23, 1996 he married Cindy Gaither Johnson and together they shared 24 years of marriage prior to his death. Goobie was employed with Energy United as a propane service technician and he was of the Baptist faith. Goobie was an avid outdoorsman. He enjoyed being outside with nature. Goobie especially enjoyed farming and working his land. He also had a passion for deer hunting and carp fishing, competing in carp tournaments with his nephews. He also had a special way of addressing problems; if its broke, cuss it! In addition to his wife Cindy, Goobie is survived by one sister, Lisa Johnson (Gary Hamby), two nephews, Michael Weatherman (Kimberly), and Glenn Johnson along with two great-nephews, Hunter and Dakota Weatherman and one great-niece Peyton Weatherman. He is further survived by his K-9 companion, Gus. The family will receive friends from 9:30 am until 10:30 am Friday, August 27, 2021 at Liberty Baptist Church, 137 Pulpwood Lane,, Statesville, NC 28625. A graveside service will be held at 11 AM at Iredell Memorial Gardens on Friday August 27, 2021. The family would like to extend their sincerest gratitude to the Central VFD and the ICSD for the rapid response and delicate care of Goobie. Nicholson Funeral Home is honored to serve the family of Grover “Goobie” Johnson, Jr.

The family of Grover "Goobie" Johnson Jr. created this Life Tributes page to make it easy to share your memories.

Send flowers to the Johnson family.