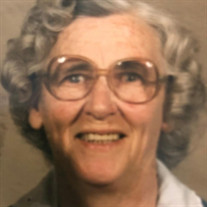 Mrs. Helen Irene Johnson Hall, 95, of 1840 Amity Hill Road, Statesville NC, passed away peacefully at home on Thursday, August 20th, 2020. Mrs. Hall was born on August 16th, 1925 to the late Otis Franklin Sr. and Isolene Whitlock Johnson. She was educated in Iredell County Schools. Ms. Helen first worked in textiles and then later worked for Bustle’s Greenhouses for many, many years, where she made numerous friends and shared her love of gardening and the outdoors with everyone. Ms. Helen was also a homemaker, a magnificent cook, and a loving mother, sister, aunt, and grandmother. On October 6th, 1946, Ms. Helen was married to the late Henry Allen Hall, Sr., and together they raised 8 sons. Ms. Helen was a devout Christian who demonstrated a faith that was strong enough to move mountains. She was kind and generous to anyone who crossed her path, always inviting folks to sit and talk or partake of her delicious, wonderful home cooked meals. Her life is a true witness to all, and there is no doubt that she is now and eternally singing with the saints in glory. Left to cherish her sweet memories are her sons, Tommy Hall of Abbeville, Alabama; David Hall (Carolyn) of Statesville; Henry Hall Jr. (Barbara) of Statesville; Kenneth Hall of the home; Keith Hall of the home; Tim Hall (LeAnne) of Statesville, and Frank Hall (Teresa) of Statesville, 14 Grandchildren; 17 Great-Grandchildren, and 1 Great-Great Grandchild. Ms. Helen is also survived by her brothers Raymond Johnson (Elsie); Elmer Johnson (Mary); her sisters Marie Cash; Carol Smith; Mary Wise (Buddy) and Patricia Stevenson, along with numerous nieces and nephews. Ms. Helen was preceded in death by her husband Henry Hall Sr.; her oldest son Jerry Hall; her daughter-in-law Cissy Hall; her infant granddaughter Sharon Elizabeth Hall, and her siblings Clarence Johnson; Clay Johnson; Rachel Jurney; James Johnson; Otis Johnson Jr. and her infant brother Delmer Johnson. Graveside services will be held on Sunday, August 23rd at 2 PM at Iredell Memorial Gardens with the Rev. Carrilea Potter Hall officiating. The body will lie in state from 12 PM until 4 PM Saturday, August 22, 2020 at Nicholson Funeral Home in Statesville and visitors are welcome to the home at 1840 Amity Hill Road. The family is being served by Nicholson Funeral Home. In lieu of flowers, memorials are requested to be made to Hospice & Palliative Care of Iredell County, 2347 Simonton Road, Statesville, NC 28625 or online at apps.hoic.org. The Hall family wishes to thank all for their love and prayers as we celebrate the life of our dear beautiful Mother and Mamaw, Helen Hall.

The family of Helen Irene Hall created this Life Tributes page to make it easy to share your memories.

Send flowers to the Hall family.