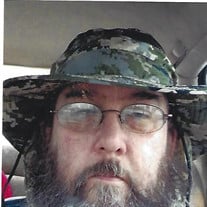 Jerry Wayne “Wormey” Hicks, 55, of Statesville, died January 4, 2022 at Iredell Memorial Hospital. Born in Iredell County on November 13, 1966, he was the only son of Gary Hicks and Brenda Goforth Hicks Combs, both of whom survive. Wormey was a graduate of West Iredell High School class of '85. On April 11, 1987 he married Delisa Lytton Hicks and together they shared 34 years of marriage before his passing. Wormey worked for Freightliner for 24 years. He enjoyed motorcycle riding with his wife, father and friends, especially on the parkway. He was an avid gun enthusiast, loved music, his dog Dutchess and tinkering in his grandpa’s garage. He also loved to talk. Wormey was preceded in death by his paternal grandparents, Robert & Geneva Hicks, maternal grandparents, David & Ruby Goforth, in-laws Bill & Rosie Lytton, and brother-in-law, Ray Lytton. In addition to his wife Delisa Lytton Hicks and parents, Wormey is survived by a sister-in-law, Contonia Snider (Eddie), two nephews, Billy & Cody Snider and one niece Rosie-Marie Snider. He is also survived by one great-nephew, Lane Snider and two great-nieces Emma Snider and Aubree-Auna Frank. Wormey is further survived by many wonderful friends, all of whom he considered "family" and too many to mention. Graveside services are scheduled for 2:00 P.M. Sunday at Society Baptist Church with Dr. J.B. Parker, Jr. officiating. Condolences may be sent online to the family to www.nicholsonfunerals.com. Memorials may be given to the Lake Norman Humane Society, 110 Robinson Rd., Mooresville, N.C. 28117 or to Hospice & Palliative Care Of Iredell County, 2347 Simonton Rd., Statesville, N.C. 28625. Nicholson Funeral Home is entrusted with the arrangements.

Jerry Wayne &#8220;Wormey&#8221; Hicks, 55, of Statesville, died January 4, 2022 at Iredell Memorial Hospital. Born in Iredell County on November 13, 1966, he was the only son of Gary Hicks and Brenda Goforth Hicks Combs, both of whom survive.... View Obituary & Service Information

The family of Jerry Wayne Hicks created this Life Tributes page to make it easy to share your memories.

Send flowers to the Hicks family.