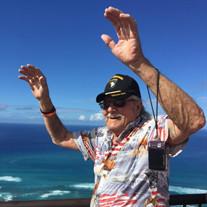 John Lee Cartner, 85, of Statesville, took his Heavenly flight, peacefully on May 10, 2021. He set off on his greatest adventure yet! “No more sorrow, no more pain”. John was born in Iredell County on March 30, 1936 and was the son of the late Percy Lee Cartner and Sarah Rose Etta Foster. John attended Harmony School and left to serve his country proudly with the U.S. Army 101st Airborne Screaming Eagles. After obliging his American duty, he drove a truck for Davis Oil Company and later for Claremont Motor Lines where he also worked as the freight manager for many years. In 1972 he joined a small but prosperous company by the name of Tilley Harley Davidson and remained there for 43 years, growing as the company grew. He was the shop foreman up until his retirement. John loved to ride Harley Davidson’s. He has ridden a motorcycle in all 50 states and into Mexico as well as Canada. How did he ride a motorcycle to Hawaii? You might ask, well, let’s just say it was a trick. John loved to travel and lived by the following quote: “It should be a sin that God made such a beautiful world for people not to go out and see it”. He was right. So the next time you are out, take in the beauty of God’s creation and remember John lived by that. In addition to his parents, John was preceded in death by his son, Johntom Cartner, and five siblings, Paul Cartner, Beulah Prather, Naomi Stroud, Ruth Kimmer, and Mary Godbey. Left to cherish the memory of John Lee Cartner are his daughter, Donna Mayberry (Doug), five grandchildren, Charity Morgan (Paul), Lauren Cartner, Jayden Cartner, Aliza Cartner, and Davey Alex Cartner along with three great-grandchildren, David Lee Rogers, Lenny Wade Harris, and Vylette Cartner. One sister, Elizabeth C. Stroud also survives. A graveside funeral service honoring the life of John Lee Cartner will be conducted at 3:00pm Sunday, May 16, 2021 at Pleasant View Baptist Church Cemetery with Chaplain Aaron Macemore officiating. Full military honors. John will lie in state from 12pm Friday until 12pm Sunday at Nicholson Funeral Home for anyone who wants to pay respects. The procession will leave Nicholson Funeral Home at 1:45pm on May 16, 2021 for anyone wanting to ride a motorcycle, to honor John, in the procession. In lieu of flowers, the family requests memorials honoring the life of John Cartner be made to the Gordon Hospice House, 2341 Simonton Road, Statesville, NC 28625. Nicholson Funeral Home is honored to serve the family of John Lee Cartner.

The family of John Lee Cartner created this Life Tributes page to make it easy to share your memories.

Send flowers to the Cartner family.