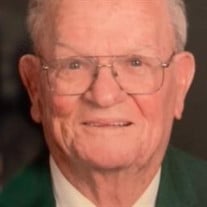 Louis Hiram James, age 97, went to be with his Lord and Savior in the early afternoon of December 8, 2020 with his daughters by his side. He was born April 22, 1923, in Statesville and was a lifelong resident until October 7, 2019, when his daughters began caring for him in their homes. He was the son of the late Hubert Hiram James and Ida Ball James. He was the loving husband of Roberta Baker James for 41 years. She preceded him in death in April, 1991. He is survived by their daughters, Becky James Dickerson and husband Ed of Spartanburg, SC, and Karen James of Greer, SC. He is also preceded in death by his six siblings, Edgar James, Sr., Lacey Edwards, Nola Bustle, Coy James, Homer James, Aileen Price, and Edgar James, Jr. who was raised in the home as a brother. He is survived by 4 generations of beloved nieces and nephews and many friends. He was educated in Statesville City Schools and continued his love of learning throughout his life. He read and studied the Bible, geography, history, world religions and many other subjects. His friends and family enjoyed hearing him recite the many poems he had memorized. He enjoyed being outdoors in God’s creation. He loved to garden and shared generously with family, friends and neighbors. He entered the United States Army in February of 1943 and was attached to Battery B, 161st Field Artillery, 35th U.S. Infantry Division. He served in the European Theater and was wounded in action as a forward observer in September 1944 in France. He was awarded the Purple Heart, 4 Bronze Stars for Meritorious Service and the Good Conduct Medal. He was honorably discharged in October 1945 with the rank of Staff Sergeant. He remained close to his “Army Buddies” all of his life. After returning from World War II, he was employed by Shaver Motor Company which became Black Pontiac. He worked there for over 40 years, many of those years as manager of the body shop. He built a loyal following who appreciated his integrity and dedication to quality work. He was a devoted member of Cochran Street Baptist Church where he repeatedly served on the Board of Deacons, many years as chair. He also served as Church Treasurer, on many committees and in the church choir. He taught an Adult Sunday School Class for 41 continuous years at Cochran Street and Westwood Baptist Churches. Later in his life, he joined and was an active member of South River Baptist Church. A graveside service will be held at 2 PM, Friday, December 11, 2020 at Oakwood Cemetery in Statesville, NC with Dr. Chris Thompson officiating. Due to COVID, for your safety and the safety of others, please social distance and wear a mask. Memorials may be made to South River Baptist Church, 2659 South Chipley Ford Road, Statesville, NC 28625. Nicholson Funeral Home is assisting the family.

Louis Hiram James, age 97, went to be with his Lord and Savior in the early afternoon of December 8, 2020 with his daughters by his side. He was born April 22, 1923, in Statesville and was a lifelong resident until October 7, 2019, when his... View Obituary & Service Information

The family of Louis Hiram James created this Life Tributes page to make it easy to share your memories.

Louis Hiram James, age 97, went to be with his Lord and Savior...

Send flowers to the James family.