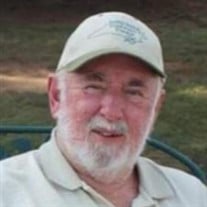 Luther L. “Renny” Holton, Jr., 75, of Statesville, passed away Tuesday, April 7, 2020 from complications of Parkinson’s Disease. Renny was born March 22, 1945 in Iredell County to Luther “Buster” Holton, Sr. and Lucille Dobson Holton. He was a graduate of Cool Springs High School and UNC State College in Raleigh. He was also in the Army Reserve. On September 1, 2001 he married Carol Wooten who survives. He was a member of Clarksbury United Methodist Church. He retired from the United States Post Office as a rural carrier after more than 30 years. He also worked at Tractor Supply of Statesville and was also a retired volunteer fire fighter with the Cool Springs Fire Department. He loved to farm. In addition to his wife he is survived by 3 step-daughters, Kelly Cansler Moore (Tim) of Calabash, NC, Tricia Cook Spry (Eddie) of Cooleemee, NC, and Christie Cook Shore (Phillip) of Mocksville, 4 grandchildren, Karen Spry Logan (Cody) of Mocksville, Joseph Spry of Cooleemee, Mathew Glass and Austin Glass of Mocksville, 1 great-grandson, Bentley Logan, 2 brothers, Tommy Holton and Jeff Holton of Statesville and a sister-in-law, Mary Holton. He is also survived by 2 nephews, Johnny Holton of Statesville and Jeff Holton of New York and a niece, Kate Holton. He was preceded in death by a brother, John Holton and his parents. Special thanks go to a good friend, Kenny Williams and the Mountain Valley Hospice staff. Due to the restrictions caused by the coronavirus, a memorial service will be held at a later time. In lieu of flowers memorials may be made to Clarksbury UMC, 924 E. Memorial Hwy., Harmony, NC 28634 or to Mountain Valley Hospice, 243 N. Lee Ave., Yadkinville, NC 27055. Fond memories and condolences may be left at www.nicholsonfunerals.com. Nicholson Funeral Home is serving the Holton family.

The family of Luther "Renny" Holton, Jr. created this Life Tributes page to make it easy to share your memories.