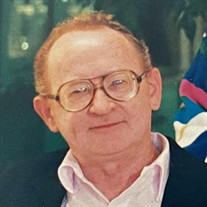 Richard Edgar Perkon, 85, of Statesville, North Carolina, passed away on April 1, 2022. He was born in Erie, Pennsylvania, on November 16, 1936, the eldest son of the late Edgar and Valle Perkon. He graduated from McDowell High School. He enjoyed living in Erie and worked there for his entire career as an aerospace engineer for the LORD Corporation at their Erie location until he retired in his mid 60’s. Later in 2020 he decided to make a big move from Erie, Pennsylvania to sunny North Carolina where he could have a little extra help from his daughter there and relief from the snowy winters. Richard enjoyed traveling, particularly to Cuba in the late 1950s. In fact, on one of those trips to Cuba, he brought back the ultimate souvenir – his wife of almost 63 years, Sarah Perkon, and her 3-year-old daughter who he later adopted. Later, he enjoyed family vacations to Colorado, Florida, and other destinations, as well as family weekends at the family’s cottage in Tionesta, Pennsylvania, which were filled with hiking and playing card games into the wee hours of the morning. He also enjoyed photography, eventually creating volumes of family and scenic photos. He is preceded in death by his parents, a brother, Allan L. Perkon, and several aunts and uncles. Richard is survived by his wife, Sarah Perkon, currently residing in Statesville, North Carolina, daughters Lenore Yurkovich of Allen, Texas, Janet Horoschuck and her husband, Michael, of Statesville, North Carolina, and Tonette Ciano of Stow, Ohio. Additionally, he is survived by three grandchildren, Nicholas Yurkovich and his wife Alecia, Chelsea Yurkovich, and Roman Ciano, as well as two great-grandchildren, Fallon and Grayson. A virtual memorial service, via Zoom, will be held on Friday, April 22, 2022, at 7:30 pm. If you would like to attend this service, you can receive the Zoom meeting link by contacting Janet or Mike Horoschuck at 704-746-4161 and/or email at [email protected] For those who wish, the link to the Mr. Perkon’s virtual memorial service and to express online condolences may visit www.nicholsonfunerals.com. The meeting will be opened approximately 30 minutes early for conversation with the family. https://us02web.zoom.us/j/88928929166?pwd=MDdrQnlKNjluNk1tMlowRm5iTXVRQT09 Meeting ID: 889 2892 9166; Passcode: 1014 Nicholson Funeral Home has the honor of serving the family of Mr. Richard Edgar Perkon.

Richard Edgar Perkon, 85, of Statesville, North Carolina, passed away on April 1, 2022. He was born in Erie, Pennsylvania, on November 16, 1936, the eldest son of the late Edgar and Valle Perkon. He graduated from McDowell High School. He enjoyed... View Obituary & Service Information

The family of Richard Edgar Perkon created this Life Tributes page to make it easy to share your memories.

Send flowers to the Perkon family.