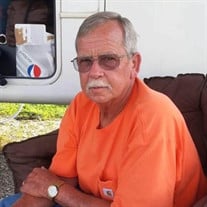 Thomas Edward White, III., 69, of Cleveland, died August 24, 2021 at Iredell Memorial Hospital. Born in Mecklenburg County on January 18, 1952, he was a son of Thomas Edward White, II and Jane Helms White, both of whom survive. Mr. White worked at Freightliner in Cleveland, enjoyed motorcycles, old cars, camping and was a volunteer fireman. In addition to his parents, he is survived by his wife, Betty P. White, a son, Chad White (Hope), a daughter, Christie Groff (Thomas), two sisters, Shelia Sells and Jamie Cook, 5 grandchildren and two brothers-in-law, Gregory and Johnny Jones. There will be a gathering of family and friends on Saturday, August 28, 2021 at Nicholson Funeral Home from 6:00P.M. until 8:00 P.M. Those attending are asked to wear a mask. Condolences may be sent online to the family to www.nicholsonfunerals.com. Memorials may be made to the American Diabetes Foundation, P.O. Box 7023 Merrifield, Va., 22116-7023. Nicholson Funeral Home is entrusted with the arrangements.

The family of Mr. Thomas Edward White III created this Life Tributes page to make it easy to share your memories.

Send flowers to the White family.