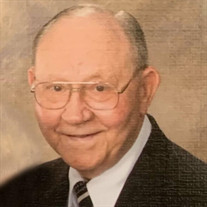 William P. Marshall, 87, of Troutman, North Carolina, passed away November 21, 2020, peacefully in his sleep at the North Carolina State Veterans Home - Salisbury. Bill, as he was known to family and friends, was born in Grace Chapel, North Carolina on May 22, 1933. He graduated from Granite Falls High School in 1951 and briefly attended Kent State University in the late 1960’s, where he studied electrical engineering. After high school he worked for the Town of Granite Falls until entering the United States Army, where he achieved the rank of Sergeant and served as a Field Radio Repairman in the 586th Signal Corps. After discharge from the Army in 1955, Bill spent most of his career in the commercial electrical industry, first as a lineman, and then as a regional or district sales director for various companies in Ohio, Missouri, and Georgia. During his career, he was frequently recognized for his ability to significantly increase market share for his employers and provide excellent service to his customers. Bill loved staying busy and after retiring, he pursued a second career as a community bus driver for Iredell County and Christian Tours. He was a member of Western Avenue Baptist Church in Statesville, and enjoyed reading, fishing, and Bible study. He will be remembered for his homespun sense of humor and vast knowledge of scripture. Bill is survived by his daughter Melissa Payton and son-in-law, James Payton of Milton, GA; daughter Martha Lawrence and son-in law, Bill Lawrence of Davidson; two grandchildren, Abigail Lawrence and Davis Lawrence, and sister Jayne M. Hayes of Granite Falls. He was preceded in death by his parents, Garland P. and Ellen R. Marshall; Barbara N. Marshall, his beloved wife of 59 years; son Joseph P. Marshall, and granddaughter Angelica Lawrence. The family will receive friends from 11:00 AM until 12:00 PM on Saturday, December 5, 2020 at Nicholson Funeral Home in Statesville, NC. A graveside service will follow at 2:00 PM on Saturday, December 5, 2020 at Sunset Hills Cemetery in Granite Falls, NC. In lieu of flowers, donations can be made in memory of Bill Marshall to Western Avenue Baptist Church, 1206 Museum Road, Statesville, NC 28625. Please share memories and condolences with the family at www.nicholsonfunerals.com

William P. Marshall, 87, of Troutman, North Carolina, passed away November 21, 2020, peacefully in his sleep at the North Carolina State Veterans Home - Salisbury. Bill, as he was known to family and friends, was born in Grace Chapel, North... View Obituary & Service Information

The family of William P. Marshall created this Life Tributes page to make it easy to share your memories.

Send flowers to the Marshall family.