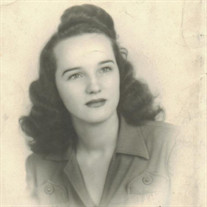 Doris Ruth Ludwick Chalich, 94, of Statesville went to heaven on June 20, 2020 after a brief stay at Gordon House Hospice of Iredell County. Born on May 10, 1926 to James Franklin Ludwick and Carrie Grace Taylor Ludwick (later Gordy) in Gold Hill, NC. Her parents met at Gold Hill Holiness Church, now Gold Hill Wesleyan Church, where her grandfather Cicero Alexander Ludwick was the founding pastor. During WWII she worked in a defense factory as an airplane riveter in Baltimore, Maryland. After the war, Doris spent most of her life in Salisbury, Statesville, and Winston Salem, NC. Much of her work was in technical roles at Taylor Manufacturing and Brenner Steel. She was an expert at sewing and designing clothes which she modeled in a national competition and later operated her own fabric store. Doris was a self-reliant person with a strong sense of charity. She was an equestrian but loved all animals and cared for many over her lifetime. Doris also made a point to help people whenever she could, no matter their background or station in life. She believed in standing on her own two feet and renovated a condemned Victorian house in the Historic District of Salisbury largely with her own hands. After a long-term friendship, Doris married Charles Chalich in 1987. Doris was preceded in death by her parents, husband Charles Chalich, and most of her siblings: Seth Staley Ludwick, James Alexander Ludwick, Lois Virginia Ludwick Hopkins, Una Maleen Ludwick Perry. Doris is survived by sister Jean Carolyn Gordy Ostwalt, of Statesville, brother John Ronald Gordy, of Charlotte, NC, and stepson Peter Chalich, his wife Heike, and their two daughters Kristen and Lora, Doris’ grandchildren. A remembrance service will be held at a later date. She will be buried with her husband Charles at Salisbury National Cemetery in Salisbury, NC.

The family of Doris Ruth Ludwick Chalich created this Life Tributes page to make it easy to share your memories.

Send flowers to the Chalich family.