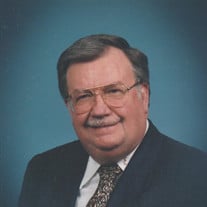 The time has come that Jesus called home one of His children, Cletis Dean Wooten, Sr. Cletis was given his wings on Saturday, December 21, 2019 at 1:33 PM while at his home with his daughter and granddaughter. His passing, although sudden for all of us, was planned by him & God. Cletis achieved many things in his 81 years. He was born in Union Grove, Iredell County, NC on June 12, 1938 to Lester Buren Wooten and Viola Gaither. Both parents preceded him in death. In 1989 he married Janet Isenhower, who also preceded him in death after 28 years of marriage. Cletis graduated from Statesville Sr. High School in 1956, then he enlisted in the U.S. Navy in June 1956. He was honorably discharged in June 1960. He was married to Dyeanne Summers of Statesville in 1959. They were married 25 years. After the navy he began his insurance career in 1960 with Durham Life Insurance, which took him and his family away from Statesville for 12 years. In 1975, Cletis retired from Durham Life and came home to Iredell County and opened an independent insurance agency, Wooten Insurance. At the time of his retirement in 2011 he had three locations. Throughout his career, Cletis found time to spend with his family, to be active in his church, and community, civic and fraternal organizations. He was an active part of March of Dimes, Heart Fund, Leukemia Drive, Kidney Foundation, Iredell County and Mooresville Special Olympics, Statesville Chamber of Commerce and SCAN (Stop Child Abuse Now). He was an active member and held titles of LUTC (Life Underwriters Training Council) and IFAPAC (Life and Financial Advisors Political Action Committee). Cletis was an active member of Statesville Shrine Club. He was a Mason and Scottish Rite since 1973 and Oasis Temple since 1973. He was a charter member of Mooresville Civitan Club servicing many officer positions and received Civitan of the Year in 1982. A member of American Legion and the USS Charles Sperry Club, the ship he served on in the navy. He was also a past member of the Jaycees and Lions Club. Cletis was an active member of ST. John’s Lutheran Church in Statesville where he served many positions including finance committee, treasurer and Sunday School Head. Cletis had many more accomplishments in his life, too numerous to mention, but he was always available to anyone who needed a helping hand or who needed someone to talk to. Cletis was a loving father of and survived by his daughter, Cynthia “Cyndee” Wooten Buchanan and his son, Cletis Dean Wooten, Jr. (Jade). He was a loving grandfather of J. Brock Buchanan (Anna), Blair E. Buchanan, Brandon D. Wooten, and Breanna J. Wooten. He was a loving great-grandfather of Ella Grace Buchanan and Olivia “Livy” F. Buchanan. Cletis is also survived by two brothers whom he loved very much. Calvin “Woody” Wooten of Jacksonville, FL and G. Paul Wooten (Esther) of San Angelo, TX. There are a large number of cousins, nieces, and nephews whom he loved and were close to many. A service will be held on Saturday, January 4, 2020 at 12 o’clock noon at St. John’s Lutheran Church in Statesville. Service will be officiated by Pastor Ernie Sheldon. Everyone is invited. Memorials may be made to St. John’s Lutheran Church or to the Shriners Children’s Hospital. A special thank you to everyone who enriched his life and gave him a purpose. “Thank you” to his caregivers, Christy McDaniels, Marty Druggers and Karen Clodfelter, who helped his daughter care for him this past year. A special “thank you”, from his daughter, to the EMS team, Fire Station #1, and Statesville police officers who came that day, tried so hard and gave their heart felt support. God bless everyone. “Dad, your life has blessed many Our memories we will treasure, You are loved beyond words And you'be missed beyond measure. We knew that you were ready. The decision was yours and His So, for all the good times, Dad It is what it is.” Online condolences can be made to the family at www.nicholsonfunerals.com and Nicholson Funeral Home is serving the family of Cletis Dean Wooten, Sr.

The time has come that Jesus called home one of His children, Cletis Dean Wooten, Sr. Cletis was given his wings on Saturday, December 21, 2019 at 1:33 PM while at his home with his daughter and granddaughter. His passing, although sudden... View Obituary & Service Information

The family of Cletis Dean Wooten Sr. created this Life Tributes page to make it easy to share your memories.

The time has come that Jesus called home one of His children,...

Send flowers to the Wooten family.